In 2008, AVC completed its first Due Diligence Review by the California Department of Fish and Game and earned Authorization to Hold Mitigation Lands.  In 2009, AVC adopted the Antelope Valley Trails and Recreation Council (AVTREC), a nonprofit organization descended from the Antelope Valley Heritage Foundation, and began hosting the annual Bicycle Ride and Earth Day Cleanup events.  In 2010, AVC rented its first tiny office space in Palmdale, and conducted the 10/10/10 Plastic Bag Exchange at six locations.

In 2011, AVC accepted its first donation of land, a small parcel in Big Rock Wash which was subsequently funded for in-perpetuity preservation.  Several other preserves have now been established in the immediate area.  And, in 2012, AVC garnered mitigation funding to establish a burrowing owl and desert tortoise preserve south of Edwards Air Force Base, which we have since expanded to 100 acres.

In 2013 AVC acquired 40 acres of essential wetlands at the Devil's Punchbowl Natural Area, in the southeastern Antelope Valley, for transfer to the Los Angeles County Department of Parks.

In 2014 AVC agreed to accept a Conservation Easement over oak woodlands habitat in the western Antelope Valley, and 300 acres along the Mojave River.

In 2015 through 2017, AVC provided mitigation planning services to the City of Lancaster for its retention basin at Avenue H, and supported the Los Angeles County Sanitation Districts' acquisition planning for Alkali Mariposa lily and other rare plants.  AVC also funded a study and worked to preserve lake habitats in the western Antelope Valley for Tricolored blackbird colonies.

By 2018 AVC had garnered state approval for the Rift Zone Conceptual Area Preservation Plan (CAPP), which positions a ten-mile wetlands corridor along the San Gabriel Mountains north slope for acquisition and stewardship funding from the Wildlife Conservation Board.

AVC has been "small but mighty" because of collaboration from community professionals to support habitat and wildlife conservation.  AVC has had a strong voice in regional planning, ensuring the importance of local habitats are recognized, and that mitigation funding is implemented locally.  AVC has developed a reputation for biological integrity in our area, and we are honored to have been chosen to fulfill preservation and stewardship projects with the California State Water Resources Control Board, California Department of Fish and Wildlife, California Energy Commission, Los Angeles County Sanitation District, Los Angeles County Significant Ecological Area Technical Advisory Committee, the City of Lancaster, and other local agencies.

AVC is Authorized by the California Department of Fish and Wildlife to Hold Mitigation Lands and Endowments in Regions 4, 5, and 6. 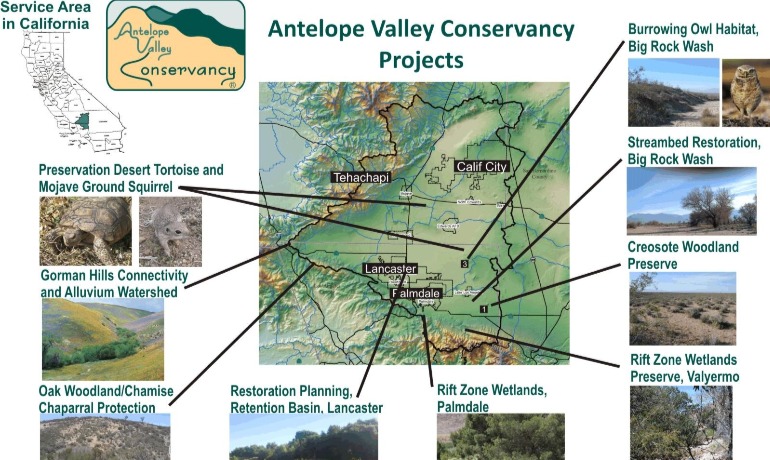 Home
Our Story
Library of AVC Documents
Donations
Contact Us